Bill Warner, a dissident author and advocate of the freedom of speech and an authority on the history of Islam, has provided us with a short, handy book (48 pages) on the chore of understanding Shania law as it applies to Kafirs, or non-Muslims. Sharia law for Non-Muslims is a must read for anyone confused by the jigsaw puzzle of Islamic priorities. 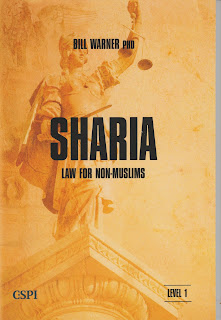 Warner cautions readers in the beginning that the book will treat Islam as primarily a political ideology, rather than as a religion. Islam, after all, is largely a political doctrine of supremacy over all other political doctrines, and is especially hostile to the doctrine of freedom in the U.S.  One may see the imposition of Sharia as a political policy in Britain, Germany, and Sweden.  Other European nations are steadily inching towards becoming Sharia dominated countries under the guise of “diversity.”

In the teaching program of The Center  for the Study of Political Islam , Warner stresses that Sharia is intended to govern not only Muslims but non-Muslims, as well. That intention cannot help but be political.

The perfect Islamic family law is sacred since it is based upon the words of Allah in the glorious Koran and the Sunna of Mohammed. All other man-made laws must submit to the will of Allah; therefore only Sharia is suitable for Muslims. For Muslims to be ruled by Kafir laws is an abomination. (p.17)

Europe is witnessing a rise in Islamic supremacism, a demand for Sharia, and violent intimidation. Laws passed by European states, and resolutions in universities and other organizations have stifled free speech. While limiting criticism of Islam, authorities have failed to prevent Islamic preachers inciting violence against women and Jews, and have tolerated public calls for violence. Islam has become a protected minority….

As it has become in Britain and Germany.

Sharia tribunals operate in the U.K., run by Islamists who openly defend a man’s right to use violence against his wife. In the U.K. and Denmark, “Sharia controlled zones” have been declared, and in Germany, “Sharia patrols” roam city streets attempting to impose Sharia norms – particularly targeting women and alcohol drinkers….

There is an increase in rape. Rape of non-Muslims is in accordance with Sharia.

Under the aegis of Angela Merkel, rape has increased in Germany over 200%. Sweden has become the rape capital of the world. Increases in the incidences of rape occur wherever large numbers of migrants – especially Muslims –  have  been permitted by open border s, “diversity,”  and “anti-bias/anti-discrimination’ policies to saturate immigration and impose their “superiority” over indigenous populations.

The seizure of Infidel girls and their use as sex slaves is sanctioned in the Qur’an. According to Islamic law, Muslim men can take “captives of the right hand” (Qur’an 4:3, 4:24, 33:50).

You can count on Warner to give a brief summation of what a peril Islam means to the U.S.  In Chapter 11, “Demands,” he writes:

Muslim leaders claim: in order for us to practice our religion, you must give us our prayer in school; in the workplace, rooms set aside in schools and worksplaces for prayer;  special food (halal); days off for Muslim holidays; head scarves at work and school and allow full body burkas in sports. Kafirs must never criticize welfare support for our many wives, give special treatment to Muslim women in hospitals, and so on.

The Sharia  lays out the complete process and strategy of immigration into a Kafir nation and what to do to Islamicize the society….

When Muslims first arrive, they accept their new home. Their first step is to announce that Islam is a brother religion to Christianity and Judaism [taquiyya] Dialogues and “bridge building” sessions are held for the media and Kafir community. They also claim that Western civilization is based on Islam’s Golden Age.  [Italics mine]

It is interesting to note that many Islamic rituals and practices are thought to have been cadged by Mohammed and his successors from Christianity and Judaism, which as religions were older than Islam and known.

After these claims are in place and accepted [largely by the MSM and those on the left friendly to the idea of Islam] come the demands for changes in the Kafir nation. Those who resist these changes are called bigots, Islamophobes and racists, even though it is never made clear why resisting political Islam has anything to do with race….

Islam is a religion and Muslims have Freedom of Religion under our First Amendment [under our despised, man-made Constitution]. So we must do whatever they want, if it is religious.  [Italics mine]

You’ve read it all before: schoolchildren being taken to mosques, and being taught to pray like Muslims, by order of local school boards or by the State; towns losing zoning suits to prevent new mosques from invading and ruining neighborhoods; churches inviting imams to conduct services within their walls. There are dozens more of such politically correct absurdities in America and in Europe. Warner’s course of instruction on Islam helps one to grasp the political and existential consequences of stealth jihad.

Readers can only benefit by perusing Sharia Law and its companion titles.