An alternate title for this column is “The Untouchables.” No, it isn’t about Eliot Ness and his team of Treasury Department agents fighting crime in 1930s Chicago. Rather, it is about why the West cannot repel the corroding incursions of Islam.

We’ve seen one country after another submit to Islam and defer to it and to Muslim sensibilities and demands: Germany leading the pack, France, Belgium, the U.K., the Netherlands, Spain, Canada…and now Australia? It’s akin to the domino effect; Islam is for some reason irresistible to the conquest of the West by Islam, per the 1991 memorandum of The Brotherhood:

“The process of settlement is a ‘Civilization-Jihadist Process’ with all the word means. The Ikhwan [Muslim Brotherhood] must understand that their work in America is a kind of grand jihad in eliminating and destroying the Western civilization from within and “sabotaging” its miserable house by their hands and the hands of the believers so that it is eliminated and God’s religion is made victorious over all other religions.”

One can be arrested or penalized for questioning Islam in any of the aforementioned countries or for casting doubt on its state-granted protected status. Responsible for the surrenders is Political Correctness; of refraining from criticizing Islam is because it might “offend” Muslims or “hurt their feelings.”  The defenders are afraid to question Islam – ignoring its brutal, blood-soaked history and the life of Mohammad as reported in the Koran, the Hadith, and relevant documents – for the same reason they will not question Christianity’s ethics or history, because Islam is touted first and foremost as a “religion.”

Almost invariably, defenders assert that the West is founded on Judeo-Christian morality of selflessness and self-sacrific; they might even say that Islam is incompatible with Western ideas of freedom of speech, liberty, and other “traditions.”

But I think the real reason Islam can walk all over the West is because the West’s defenders can think of no argument against it. Refuting Islam would take them to where they will not go. Islam can make immigrational beachheads, per the MB memorandum, in countries like Australia, with impunity and get away with it. From these beachheads come the “radicalized” jihadists who kill, stab, blow up infidels, and run them over once they have inculcated the fact that Islam is an anathema to the West. They do not dare question Islam because they will not question Christianity’s religious “heritage,” even though historically the Catholic Church was an enemy of the Enlightenment.

Metaphysically, the Western God little differs from Islam’s Allah, or from Casper the Friendly Ghost. In all of Christianity’s history (one of my favorite analogies), and as in Christianity about God, in Islam, the deity’s physical appearance has always been a fanciful conjecture and a figment of imagination. Neither imaginary deity has ever made an appearance among men to prove his existence; one’s belief in God or Allah has always been based on “belief,” or “faith,” as unsubstantiated evidence and constantly elusive from the evidence of our senses. But Islam is more than a “religion,” as it is a political agenda to be imposed, by hook or crook, on the West. God doing a walk-on for men would be an historical event, provided it was even possible.

But is Australia giving in? Read Lauren Southern’s experience in Sydney when confronted with a high ranking police officer.

AU News  Canadian YouTube personality Lauren Southern has broadcast another video fail during her Australian tour. Flanked by seven security guards, Southern visited the area in an attempt to expose the western Sydney suburb, which has a significant Muslim population, as a “no-go zone.”

Southern claimed there were “heads turning” as soon as she and her guards and film crew hit the streets of Lakemba [a Sydney neighborhood, heavily Muslim]. “Men started yelling in Arabic across the street at us,” she said. When she tried to interview passers-by and “criticize Islam” outside Lakemba mosque, the 23-year-old was halted by local police who stopped her, saying they had “grave concerns” about what she planned to do.

Her presence there, the police officer said, would constitute a “breach of the peace,” and were she or her camera crew attacked or harassed, she would be blamed and would be arrested, not the force initiating Muslims. Her presence would “trigger” aggressive and probably violence Muslims, because they’d be “offended” if Southern said anything negative about Islam. It; looks like Southern would be banned from Australia, as she has been from the U.K.

“As far as I’m concerned, this is Sharia, and Lakeamba is a conquered land,” Southern wrote.

Since religion is a primitive form of philosophy—an attempt to offer a comprehensive view of reality—many of its myths are distorted, dramatized allegories based on some element of truth, some actual, if profoundly elusive, aspect of man’s existence….

In mankind’s history, art began as an adjunct (and, often, a monopoly) of religion. Religion was the primitive form of philosophy: it provided man with a comprehensive view of existence. Observe that the art of those primitive cultures was a concretization of their religion’s metaphysical and ethical abstractions….

It has often been noted that a proof of God would be fatal to religion: a God susceptible of proof would have to be finite and limited; He would be one entity among others within the universe, not a mystic omnipotence transcending science and reality. What nourishes the spirit of religion is not proof, but faith, i.e., the undercutting of man’s mind….

Christ, in terms of the Christian philosophy, is the human ideal. He personifies that which men should strive to emulate. Yet, according to the Christian mythology, he died on the cross not for his own sins but for the sins of the nonideal people. In other words, a man of perfect virtue was sacrificed for men who are vicious and who are expected or supposed to accept that sacrifice. If I were a Christian, nothing could make me more indignant than that: the notion of sacrificing the ideal to the nonideal, or virtue to vice. And it is in the name of that symbol that men are asked to sacrifice themselves for their inferiors. That is precisely how the symbolism is used.

If the West’s defenders adopted the philosophy of reason, they would have no trouble refuting Islam or its alleged “superiority” over Christianity or any other religion, and thus rebuff all attempts to insinuate itself into the West.

To hate something, is to fear it. To see and treat it as a mortal threat to one’s values.  Or not. Most Western defenders do not see Islam as a threat. It buys the whole Islamic package that it is a “religion of peace,” when the historical record shows otherwise.

Religion is the magic word that stymies the West and its defenders. “We have to respect Islam, they claim, “because it’s a religion. It is untouchable by common reason and morality just as ours is untouchable.”

The Ubiquity of Hatred 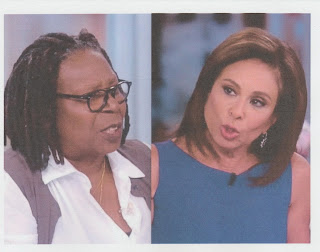 In my July 7th column, “The Democrats’ Declare a Fatwa on America,” I contend that, for all practical purposes, the Democrats  have declared war, not just on Donald Trump, but also on the U.S.  Just as jihadists assert that their purpose is to impose Sharia on the country, the Democrats wish to impose Progressivism  on the country. America is “deplorable,” and Trump is the most deplorable American of all.

I have not experienced the magnitude of ranting hatred that was unleashed on Jeanine Pirro by Whioopi Goldberg on “The View”  but my first taste of the mania occurred on Facebook when a former friend  dared insinuate I was a traitor to my series, “Sparrowhawk” and asked me how successful the series would be if one of the heroes obscenely attacked one of the female characters as Donald Trump allegedly said should be done to women,  or had Patrick Henry sit down to negotiate with George III. It was a stupid ruse, and insulting, because I never wrote what he imagined I might have written but in fact never would have and didn’t. The commentator, (there is no point to repeating his remarks here) revealed that he is yet another victim of the Trump Derangement Syndrome (TDS), probably as bad as Whoopie Goldberg ‘s.

To anti-Trump libertarians and their numerous kin, because I support President Trump, I should be marched behind a dumpster and shot. Trump is vulgar, pragmatic, and a power luster. they say, and likely a “fascist” because he imposed tariffs (which were retaliatory in nature).  Or at least I should be subjected to Maxine Waters’ brand of hatred. Or Goldberg’s.  When you look back at Waters’urging that people harass or abuse Trump supporters wherever they’re found, you have to ask yourself: Did Goldberg take her urgings to heart? Did Goldberg treat them as a sanction? The connection should be quite clear; they are linked.

To hate something, is to fear it. To see and treat it as a mortal threat to one’s values. But Trump is not a threat to anyone’s values, and yet he is hated. He has done nothing but augment the importance of one’s values, one of which is this country. By the haters, he is put in the same box with true value-destroyers such as Hitler, Stalin, and Mao (to name but a few murderous tyrants from this century), about whom the Goldbergs and Waters’s know little or nothing.  To the haters, what is it that he threatens?

A controlled world, a ruled society in which everyone deferred to the elitists and took orders. To the libertarians, Trump represents, not just a flawed character, but a dictator in the making. They imagine his shirt lapels are adorned with the SS insignia. Trump has worked assiduously to correct or eliminate the damage done to the country by Obama and eight years of his anti-American presidency. But they are as blind or indifferent to Trump’s achievements as the Democrats and Congressional socialists who endorse violence and yearn to return the country to what it was under Obama, stagnant and in a slow drown in a sinking boat. The Constitution would be turned into a meaningless Scrabble puzzle.

One should wonder why hatred is so common and vociferous in the country today. Is it a plague of socialist salmonella? No. Its cause is the non-acceptance of the fact that Hillary Clinton lost her bid for power. Facts have always been the enemy of collectivists of all stripes . They turn otherwise anonymous non-entities into emotional, raving Whoopie Goldbergs.